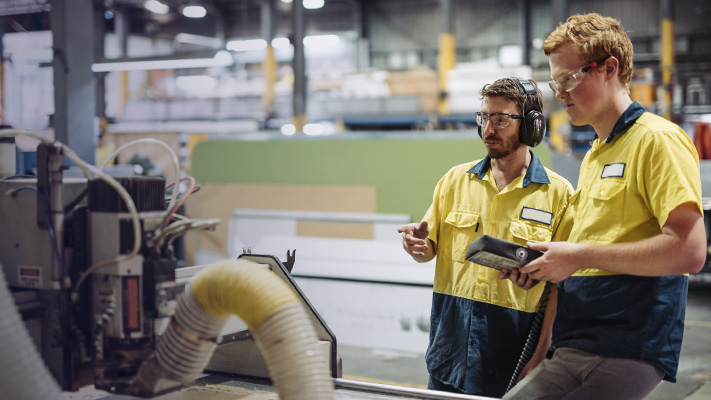 If asked to describe your perfect team member, chances are your list will include characteristics such as 'energetic', 'enthusiastic', 'productive' and 'team player'.

What if finding that team player was easier than you imagined?  What if an apprentice could tick the box?

Hosting an apprentice may not be the first thing you think of when it comes to finding the next member of your team. Many people envision it as being hard work. All the paperwork, the training and the ongoing supervision. However, if you take a look at the bigger picture, you’ll see that that’s not always the case.

There are multiple benefits to hosting an apprentice via a recruitment company.

For starters, hosting, rather than hiring, removes the stress associated with apprenticeship employment terms. Group training offers flexible options so that you only host an apprentice for the time you need, at the level you need.

In the meantime, all apprentices remain full time employees of the recruitment company. They manage the H.R. side while offering ongoing support to the host. Advice and assistance are only ever a phone call away, to ensure the employment experience is a positive one.

So, aside from this, what are the other benefits to hosting an apprentice?

Apprentices bring with them new energy, ideas and a thirst for learning. Their motivation, desire for success and enthusiasm is contagious and inspiring to others. Through their eyes, other employees can see areas of positivity within the business and team, as well as areas for improvement.

Changes as a result of this can lead to a happier team.

The positive morale that an apprentice brings to a team also impacts on staff output. Good staff morale results in improved attendance and performance, higher quality work and increased job satisfaction. Naturally, all of these things contribute to productivity

In fact, research shows that, since hiring an apprentice, employers experienced a 78% improvement in productivity.

This is in stark contrast to poor morale, which results in inefficient and unenthusiastic employees, which affects productivity and, potentially, a company’s bottom line.

When you host an apprentice, it’s not only the apprentice who gets the opportunity to learn. It’s your other employees too.

Helping an apprentice to settle in and learn the ropes gives existing team members the opportunity to develop their mentoring and nurturing skills, as well as their delegation and management skills.

Having an extra set of hands means that team members can delegate some of their workload in order to focus on their own core duties. The more the apprentice learns and can take on, the more the team members gain in terms of time and productivity. Now, that’s a win.

With mentoring and leadership skills under their belt, employees are better qualified to take on additional, senior responsibilities or step into more senior roles within the organisation or team. So, investing in a learning culture benefits all.

In fact, in a 2019 LinkedIn study, 94% of employees said they would stay at a company longer if it invested in their staff development.

Sometimes there’s just too much work and too little time. That filing, admin or unfinished project compete for attention and that deadline’s going nowhere. Here’s where an apprentice can help.

An apprentice can take on some of the excessive workload and, subsequently, free up other team members to focus on more pressing tasks. Relieving the pressure on them can result in bigger gains all round.

Furthermore, a role can be tailored for the right apprentice with the right skill set.

Injecting new energy and creative ideas into a business

It’s unlikely that you’d argue against an injection of energy and creative ideas into your organisation. And that’s exactly what an apprentice can bring.

An apprentice will have a different and fresh approach to problem solving and idea development which can result in new and innovative ways of working. These changes can help to energise and motivate existing staff who may previously not have seen any opportunity for change.

An apprentices’ technological knowledge is also a bonus, as a better understanding of current social media and technological trends can help create competitive advantage.

Finding Diamonds in a Candidate-Rich Job Market
5 Ways To Overcome Unconscious Bias When Hiring
Beyond The Premiership - Supporting Indigenous Employment With Rumbalara
Successfully Navigating The Festive Season In A Multicultural Workforce
6 Practical Tips For Keeping Your Staff Engaged
Successfully integrating white-collar workers into a blue-collar environment
How To Be Ready For Anything When Pitching Your Services
Pros and cons of letting your employees work from home
5 Ways To Look After Your Employees’ Mental Health
Understanding and preventing mental injuries in the workplace
Effective ways to foster passion in the workplace
Guide: Discussing Career Progression With Your Employees
When To Choose Labour Hire Over Recruitment
What is Temp-to-Perm Hiring and When Would I Use It?